Mosey on to the base of Jucomanjaro. 8 cones spaced out going up to the summit. Each cone marked with an exercise.   Battle Buddies complete 50 reps total as a team, one exercising while the other runs to next cone and performs 3 hand-clap Merkins before running back. Once reps complete, teams move to next cone and repeat, making our way slowly to the top. Exercises: Jump Squats, LBCs, Incline Merkins, Monkey Humpers, Freddy Mercury (4ct), Decline Merkins, Windmills, SSHs.

Once PAX reached the summit, we were greeted by Waxjob, levitating amongst four blazing torches of fire and the Golden CMU perched atop of a large log seemingly engulfed in flames. Bartman presented the Golden CMU to JUCO but required exercises called by Judge Judy (10 Burpees) Booster (100 calve raises) and Spotter (25 Harry Rockettes) before it was handed over.  Judge gave a short speech about Spotter’s awesomeness and announced Spotter would be keeper of the CMU – well deserved!

Pax jogged back down the mountain with the inflamed torches ablaze. Once torches were extinguished in the duck cesspool, PAX performed Merkins – x40, x30 and x10 before circling up for MARY at the shovel flag. 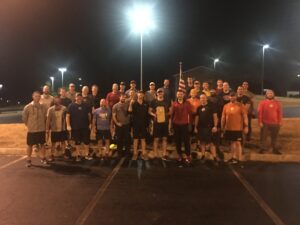 CIRCLE OF TRUST/BOM:
Judge Judy told a story of a hostage situation he encountered at work and the tremendous leadership and bravery displayed by law enforcement during the event.  What difficult Jester in your life is Christ asking you to clean up? Do you have the courage to obey his command, even when it feels like too much to ask?
MOLESKIN:

Golden CMU handoff was absolutely epic. Thank you Bartman for co-Qing with me and Waxjob, La-Z-boy and Code Brown for making the ceremony so creepy, yet awesome.
ANNOUNCEMENTS:
Abscess traveling to Cleveland for 1 year anny.