THE SCENE
43, breezy with a little rain towards the end

THA-THANG
Line up along one side of parking lot

Line up on the side of the parking lot opposite the CMUs and partner up with Battle Buddy.

Grinders
Battle Buddy 1 lunges to the first cone (12 lunges total) then sprints to 2 second cone, does 3 reps of the exercise and lunges back to where he started while Battle Buddy 2 is jumping air rope. Switch.

Each round increase by 3 reps until each man does a total of 15 reps.

Line up at the base of the hill next to the parking lot.

Merkin Hill
Run up and down hill doing the following:

Proverbs 4:23 – “Above all else guard your heart (i.e. your mind, will, and emotions), for it is the wellspring of life.”

BLUF – Guard your mind, set your standard and don’t quit. We are not meant to simply coast through life, we meant see every day as an opportunity to get better and make a difference. Life isn’t measured by failure or success, it’s measured by impact.

THE SCENE: Balmy, Humid, 26 degrees for “The Best Sunrise in America”.

100 SSHs in cadence. Is there another way to warmup??

***Pickett’s Charge*** followed by star gazers at the Coliseum

Everything you got up Baby Everest to the AO!!

CIRCLE OF TRUST/BOM:
After the Pandemic “normalizes”, we will never be the same. That may be a good thing in some areas. What things do we have in our lives that never need to be the same? That we need to peal away and keep that way. Spend time alone in the coming days identifying what has changed (or needs to change) during this year that is a good thing (or will be).

MOLESKIN:
The Saturday before Christmas is by far the funnest Q of the year. The Christmas music (wireless speaker) throughout the workout was clutch.
ANNOUNCEMENTS:
Triple Birthday Q next weekend at the Asylum!! AYOOOOOOOOO….

Follow the Covid recommendation’s …. I am worse than any amateur, modify as necessary. We are going to do some hills today.

The goal for this workout was to hit each of the primary hills in the Asylum AO. While planning the workout Pluto realized that an appropriate theme was the movie the Sound of Music. At multiple points in the workout the Pax sang the “The Hills are alive with the sound of F3” The singing was high spirited, but not in tune.

COUNT-OFF & NAME-O-RAMA
24 Pax got better this fine morning! Pele, Drum Major, Waffle House, Lillydipper, Hot Tub, Hooker, Jumbo, Mickey, G String, Convoy, Choir Boy, Matlock, Dung Beatle, Gilligan, Abacus, Gobbler, Swimmies, High Heels, Crawldad,
CIRCLE OF TRUST/BOM:
Pluto shared how one of his favorite movies to watch during the Christmas season was the Sound of Music. As we hit the four hills of the Asylum AO this morning the song the Hills are alive with the sound of F3 was an appropriate theme. It is a rare that we do all four of these hills in a workout. Only have time to do so on a 1 hour Saturday. As we finished the workout the song ” Climb Every Mountain” was a closing song and finished  the Sound of Music workout  theme nicely. Pluto then shared 10 points of Trivia related to the Sound of Music and a tie in to leadership lessons from the Sounds of Music that were in a Forbes Magazine article a few years ago.

The Von Trapps did escape Austria as the Nazis came to power, but they didn’t flee over the Alps, they got on a train to Italy and then traveled to America, where they had a concert tour scheduled. The day after they left, Hitler ordered the Austrian borders shut.

When they left Austria, Baron von Trapp and Maria had already been married for years and had two children of their own, with another on the way.

When the von Trapps came to America they settled in Stowe, Vermont. They opened the Trapp Family Lodge, which is operational to this day.

The Sound of Music was the eighth and final musical written by Rodgers and Hammerstein, but Hammerstein never saw the movie. He died of stomach cancer nine months after the Broadway premiere.

“Edelweiss” was the last song Oscar Hammerstein ever wrote, the production of the movie had to stop for two hours to teach all of the extras the words to the song for that scene.

When it came to the movie, Julie Andrews wasn’t the first choice for Maria! Producers wanted Grace Kelly or Doris Day to replace her.

Sean Connery, Richard Burton and Bing Crosby were in the running to play Captain von Trapp, before the role went to relative newcomer Christopher Plummer.

While filming the iconic opening scene, twirling in the hills of Austria, Andrews kept getting knocked down in the mud by the gusts from the helicopter carrying the camera.

Adjusted for inflation, it’s one of the highest grossing films ever made, right behind Gone With the Wind and Star Wars.

It had the longest first run in U.S. cinemas ever at four and a half years.

As we prayed together we as HIMS so often pray for our significant others and others in the Pax undergoing spoken challenges. Please remember that each of us has our own challenges each day & that all of us are going through something. Remember to pray for all the unspoken needs of our Pax and fellow f3’ers
ANNOUNCEMENTS:

The workout was followed by a well attended and enjoyed coffee time at Panera.

How different would our lives look if we put others needs before our own.  Show someone love today especially those who might not have show it to you.
Let each of you look out not only for his own interest but also for the interests of others. Philippians 2:4 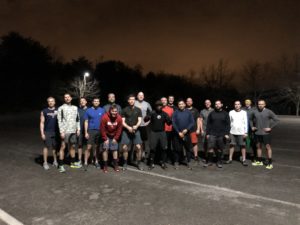 ANNOUNCEMENTS:
Hardship hill sigh up DO IT!

MARY:
Finished with some ab work:

How are you justifying your ways??

MOLESKIN:
Crab-legs tweaked his back…pray for quick healing as the elderly fall out 😉