CIRCLE OF TRUST/BOM:
1 Peter 5:5 Clothe yourselves with humility. It is a conscious act. Get up each day and put on humility. We don’t do this accidentally.

Hang man, yes we played hangman. 5 games of it

MARY AKA the REWARD for doing so well at Hangman
BEARWAY TO HEAVEN
COUNT-OFF & NAME-O-RAMA
15 pax
CIRCLE OF TRUST/BOM:
The words we played hangman with were, Guts, Resilience, Integrity, and Tenacity. ALL together makes the acronym for GRIT which was the last word. I hope we all have GRIT in some form or fashion.
MOLESKIN:
As a coach once said, “GRIT is the ability to finish strong”. Don’t just roll across what ever finish line you are crossing, finish strong and all the way through
ANNOUNCEMENTS:Convergence for 5 year anniversary for F3 Knoxville, AYE! 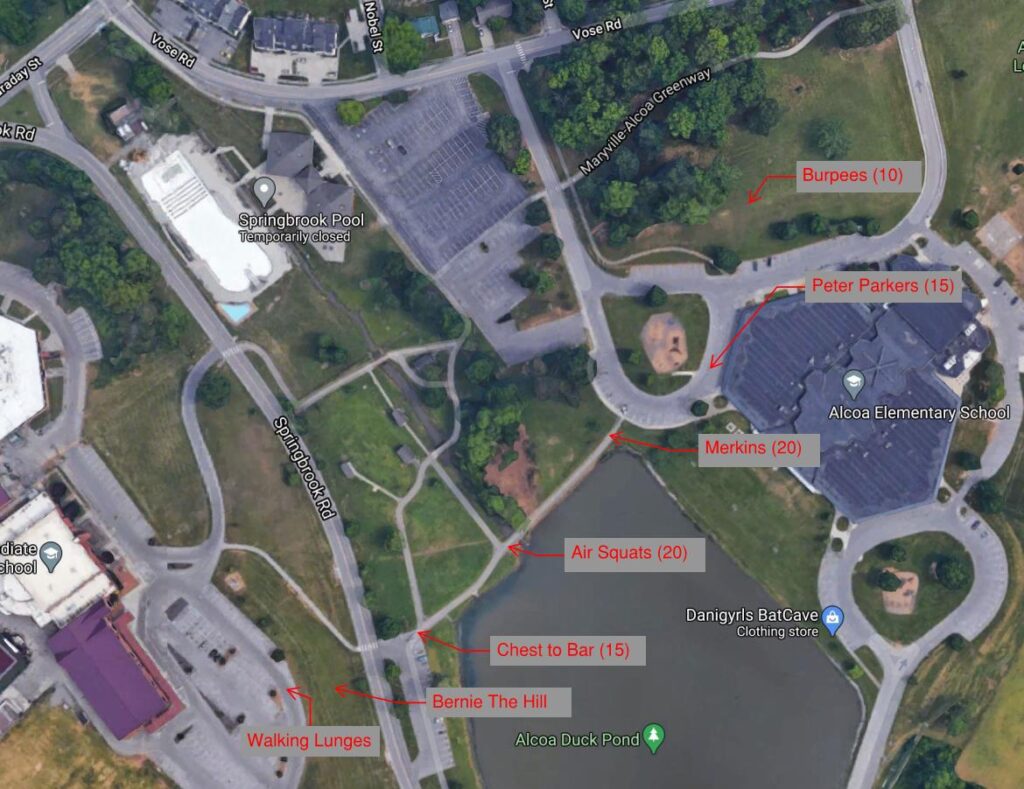 Indian Run Back to A.O.

MARY:
10 BBS to catch yo breath
Flutter Kicks
Hello Dollys
1 min plank to finish it out

COUNT-OFF & NAME-O-RAMA
12 Pax with a special appearance by Veep meeting us at the beatdown location! (13)

CIRCLE OF TRUST/BOM:
Kept it simple this morning. DON’T BE A JERK! Jerks aren’t cool. Do something nice for someone today.

NO FNG
CIRCLE OF TRUST/BOM:
Shout out to Drifter for powerful testimony on Saturday for 3rd F. It really was awesome and inspiring to listen to. It challenged me in my own faith to not just sweep things under the rug but admit faults and confessions to believers. We should all strive to give testimony in life as we do not know who we influence with our words.

It was my first day back in church in months this past weekend as well. I had been out of my routine, stuck in my own rut without normalcy I had before. I lacked obedience during this month which led to running astray from God and seeking personal addictions. During this time I got away from scripture, prayer, and ultimately fellowship among faithful believers. Consistency and repetition are key in relationship with God. Immerse yourself in the scripture, pray daily, and talk with believers. It was during this time away that I became angry and waited for God to intervene instead of seeking to be faithful myself. Ended with one of my favorite scripture: Isaiah 6:8. Pray for God to use you and send you to complete His work rather than always seeking something in return.

Then I heard the voice of the Lord saying, “Whom shall I send? And who will go for us?” And I said, “Here am I. Send me!”
ANNOUNCEMENTS:
Next Convergence event November 7th!

-Head to baseball field, PAX lines up at home plate, burpees while you wait your turn.
-Sprint between bases.
-10 WW2s at first base
-20 Monkeyhumpers at second base
-30 Merkins at third base
-40 Squats at home plate

-Run one outfield lap after first inning, two after the second and so on… Most got 4 1/2 innings in.

CIRCLE OF TRUST/BOM:
Convergence this weekend at the Bomb Shelter, if you haven’t been to an F3 convergence they are awesome!
MOLESKIN:

ANNOUNCEMENTS:
Rosters for the Bomb Shelter baseball team will be posted next week!