On Wednesday, October 23, I met two people in Oklahoma City who have overcome great obstacles to make a difference in our world and impact me in a strong way.  Amy Downs was a 335 pound woman living a bad, unfulfilling life.  She was a college dropout, had no social life, didn’t volunteer in the community and was a teller at a local credit union.  One morning while talking to a friend at work, there was an explosion and she found herself trapped. She thought it was a nightmare but it was a real nightmare.  The Murrah Federal Building where her credit union was located on the 3rd floor was under attack by domestic terrorists.  She fell 3 stories and was trapped on the first floor where the daycare was located.  For 6+ hours, she cried, asked God to forgive her for not living her life to her fullest and begged to be saved.  She promised God if her life was spared that she would do her best to fulfill her promise.  She was rescued and turned into a different women.  She lost 200 pounds, she got her bachelors and MBA, she started attending church and volunteering in the community.  Amy got married, had 2 children and is now President/CEO of Allegiance Credit Union where she worked during the bombing.  Amy became an endurance athlete and has competed in countless ironman, marathons, etc. around the world.  She is now making the most of the gift God gave her.

Lt. Colonel Forrest “Woody” Aurentz (retired) and I sat next to each other on the plane back from Oklahoma City to Atlanta.  He’s a great guy.  He started the Gathering of Mountain Eagles, a charity that helps wounded veterans.  Woody and his volunteer team takes them whitewater rafting, deep sea fishing, skiing, etc.  I asked him what made him start his charity…he paused and looked away.  I told him it’s OK if he didn’t want to share.  Woody looked back with tears in his eyes and began another nightmare that led us both to start crying at 30,000 feet above our great country.  When his daughter was 14, she went on a church trip to an amusement park out of town.  A drunk driver hit her bus and 27 people were killed including her best friend.  His daughter would have died but she woke up because her legs were on fire.  She crawled off the bus.  She lost her leg and was burnt more than 65% of her body.  Woody ended up having PTSD himself because he would hold his daughter’s hand as the trauma team would cut the dead skin off of his baby girl twice a day.  He said it was the worst experience of his life.  The military men and women up near Fort Knox, Kentucky where they were stationed were there to help Woody, his wife and family with food, financial and emotional support, donating blood, etc.  He promised that if he was ever in a position to help the men and women who have served our country that he would.  Woody said he’s great at organizing but doesn’t know anything about fundraising.  I asked Woody what he would do if his charity had more money and he said have more activities and trips because there’s always a waiting list and people that can’t afford to pay to get to wherever the activity will be held.  I’m going to start helping the charity pro bono through my new fundraising consulting firm.

ANNOUNCEMENTS:
Brolympics is on November 9

THE SCENE: 50s and foggy
F3 WELCOME & DISCLAIMER
WARM-O-RAMA:
LBAC F/B, OHCs, Temp Sq, TN Rock’n Chair
THA-THANG:
Mosey to Light Poles on East side of campus.  Lunge to each pole and perform 5 reps of The World’s Greatest Merkin. 10 poles in all.

Mosey to Large Parking Lot and Battle Buddy up.

One partner runs across Parking lot and back while other does ab exercise.  When runner returns, he rescue drags partner 10 yards to next parking lane. Rinse, Switch, and Repeat – making our way across the lot.

Mosey back to Shovel Flag. 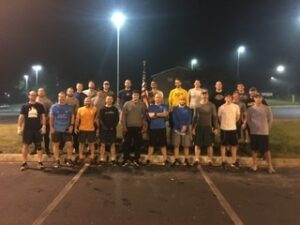 CIRCLE OF TRUST/BOM:
When US Marines eat together, the Officers and Senior Leaders eat last and often serve their subordinates food before they finally get to eat (if there is enough food left).  This is a symbol and demo of their servant leadership philosophy.  What kind of leader are you? Do you go home after a long day and expect to be served? Or are you serving? When you sit down with your family to eat, are you the first to order or fill your plate? Or do you take care of your wife and children first? When entering a restaurant with coworkers, are you rushing to get in the order line? Or are you holding the door so others can go? Leadership sometimes can be a simple act – you don’t need words.
MOLESKIN:
N/A
ANNOUNCEMENTS:
Food drive!

Next, head pack to the street and do 20, 4-ct flutter kicks.  Then, head toward the grassy hill (aka The Stadium, The Wall, and perhaps other names) towards the maintenance building. 20 squats at the top.  Run back to the parking lot by the pond and do 20 more 4-ct flutter kicks.  Then, run in the opposite direction along the street up to the corner and do 20 merkins.  AMRAP until time is called.

MARY:
20 Freddie Mercury to gather the 6 and then mosey back to the shovel flag.
COUNT-OFF & NAME-O-RAMA
23 with 1 FNG.
CIRCLE OF TRUST/BOM:
Matthew 7:15-24 – I won’t repeat all of those verses here, but please read them all. V. 15 “Beware of the false prophets, who come to you in sheep’s clothing, but inwardly are ravenous wolves.” v. 22, 23 “Many will say to Me on the day, ‘Lord, Lord, did we not prophesy in Your name, and in Your name cast out demons, and in Your name perform many miracles?’ And then I will declare to them, ‘I never knew you; DEPART FROM ME, YOU WHO PRACTICE LAWLESSNESS.'”

Those “works” all sound like great things, but Jesus says he will claim “I never knew you…”.  Our God wants pure love from His children.  He is not satisfied with those who only put on a facade and may look like His followers, but inwardly are “ravenous wolves”, “bad fruit”, and will be “tossed in the fire”.  A checklist mentality is not satisfactory.  Jesus condemned the Pharisees time and time again for living like that and not having an actual love for God.  They were very sell-serving.  There is a reason Jesus says the greatest command is to “Love God with all your heart, soul, and mind”. Matthew 22:37-38
MOLESKIN:
Welcome to our FNG, Todd Busch soon to be renamed.
ANNOUNCEMENTS:
Brolympics Nov. 9th. 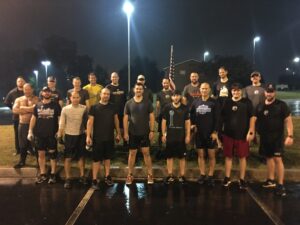 CIRCLE OF TRUST/BOM:
2 Corinthians 12:9 “my grace is sufficient for thee: for my strength is made perfect in weakness.”
MOLESKIN:
N/A
ANNOUNCEMENTS:
Brolympics

We going to play a game called “Mutton”.  One PAX is “the sheep” – he wears a flag belt and holds an interval timer (my phone).  The rest of the PAX are “lions”.  Here’s the game;

Stop at the coupon pile to do;

Start “Mutton” again and work our way back to the shovelflag.

A pregnant lioness attacked a flock of sheep.  As she sprang on her prey, she gave birth to her cub and then died.  The lion cub grew up in the company of the sheep.  As the sheep ate grass, the cub followed their example.  They bleated; the cub bleated too.  Gradually it grew to be a big beautiful lion but still acted like a sheep.  He had no idea, not even in his dreams, that he was a lion.

One day an old lion passed by and saw this young lion standing with the sheep, acting like a sheep.  So, he gave chase and got ahold of him.  The young sheep-lion said, “Please don’t!  Let me go!”.  But the old lion said, “come with me!” and dragged him to a lake.  He made him gaze into the water and said, “Look at yourself!”  So, the lion who thought he was a sheep looked and for the first time he saw his reflection.  Then he looked at the old lion, and he looked in the water again, and he let out a mighty roar.  He was never a sheep again.

1. “The opposite of a man is not a woman; the opposite of a man is a boy” (hat tip Judge Judy). I have three boys at home, and I can tell you that they are often self-centered and short-sighted.  Boys live for gratification and pout when they don’t get their way.  As a high-impact man, you choose not to endlessly chase your own desires, but instead to live sacrificially.  You put the needs and interests of others above your own.  You operate with intentionality and have a consistent positive influence on your community.  You are a high-impact man.

2. If you are in Christ, you are a new creation; the old has gone, the new is here (2 Corinthians 5:15). The old was lust and greed (Colossians 3:5), selfishness, jealousy, envy, and rage (Galatians 5:19-21).  You no longer have a spirit of fear, but a spirit of power, love, and sound judgement (2 Timothy 1:7).  You set your hearts and minds on things above (Colossians 3:1-2).  You’ve clothed yourselves with compassion and humility (Colossians 3:12) and the Spirit of God produces in you love, joy, peace, patience, kindness, goodness, faithfulness, gentleness, and self-control (Galatians 3:22-23).  You are a new creation.

3. This one applies to every single one of you – every one of you is the old lion in the story. In your life, there are young lions who act like sheep – and who think they are sheep (we call them “Sad Clowns”).  Grown men who live like selfish boys – men who profess Christ, but who follow their flesh instead of the Spirit.  You must pursue and get ahold of that man.  You must be an example of a high-impact man in his life and show him what he was created to be.  You may just give that man his first glance at his “imprisoned splendor” (hat tip Robert Browning).  You may just be the conduit that God uses to rescue that man from his selfishness and meaninglessness, and to call him into a life of service and sacrifice to the glory of God.