CIRCLE OF TRUST/BOM:
It’s a great time to know the Lord.  So much in our culture is shifting.  Apart from being anchored in knowing God, we are like shifting sand driven by the waves all around us.  Anchor your souls in the knowledge of God.  What a great time to go back and study some basic theology (study of God) about the attributes of God — He is unchangeable, holy, wise, good, loving, sovereign.  To know God leads to trusting God and finding an anchor for our souls.  Spend some time in the Bible, a good theology book, or grab another man and study God together.

THE SCENE: The Dog Pound ground was dry but the air was soaking wet. It was Hum-Ed.
F3 WELCOME & DISCLAIMER
WARM-O-RAMA:
Did some classic SSH, Merkins, this and that’s, burpees and baby arm circles.
THA-THANG:
Tank, yes I referred to myself in the 3rd person, started the co-Q with a nice little mosey to the steps below “Dwayne Johnson”.
Do 1st exercise, run a lap around the left side of island and up the little baby steps. To starting point where you more to the 2nd exercise. Repeat till you go through all exercises.

then do some line hops in plank, some line touches in plank, some dips on the curb.
Doubtfire took over the Q duties and made us run to Nashville, I mean the pavalon. Mayberry had to remind him we did build pull up bars but Doubtfire just kept making us run like some sort of evil dictator. We pleaded to stop but he just hissed at us. I was scared.
We finally got to the pavalon where he had a boom box playing soothing sounds from what sounded like Barbara Streisand. Doubtfire said it was his favorite singer and mentioned something like “she is magical” and looked at us all quite uncomfortably. He then told us o do  pull ups and lunges starting with one and working up to 11. Running up to the top gravel it and doing the same with burpees. How nice of him. Once the first heart attack happened he called off the dogs and we headed back the long cut way to the AO because the previous Q forgot his cell at the steps.
Once everyone got back to the AO and we hit 3 miles, we had a little date with Mary.

MARY:
Hello dollys for the cheetahs until the 6 (me) caught up. Then as a group we did flutters x30 and some awkward one legged donkey kicks to firm up the buttocks for the ladies. There were tennis players there and I was tempted to do pickle pounders and monkey jumpers but figured that they would enjoy it too much.

COUNT-OFF & NAME-O-RAMA
12 total with one FNG Mudpuppy
CIRCLE OF TRUST/BOM:
Doubtfire took the reins and talked about the 2nd F and reaching out to our brothers in need. If you haven’t seen someone in a while reach out to them. Dedicate some time to them. Lots of struggles going on out there and no one needs to go through it alone.
MOLESKIN:
Doubtfire and I have been absent from the dog pound for quite a while. Although I still consider the dog pound my original home AO,  I have been cheating on them with the equalizer. I do feel bad about it. The equalizer guys are so nice to me. No one ever tells me that I’m stupid or get out of my way tank you’re going to slow. They never say things like “man are you out of shape.” Or “that’s not the way you do a Burpee you loser”. I was feeling pretty good about myself and I think I needed to be knocked down a couple of notches, that’s why I decided to come back to the dog pound. It was good To be humbled. In all seriousness though, I did miss the guys at the dog pound. I think I’m going to be mixing it up a little bit more in the future. #allf3AOsRULE
ANNOUNCEMENTS:
CSAUP on the 18th, mend house donations

THE SCENE: Muggy with a capital “M”
F3 WELCOME & DISCLAIMER
WARM-O-RAMA:
SSH (4 ct IC) x 25; BAC (4ct IC -forward and reverse) x 10; OH Claps (4 ct IC) x 10; This and that; Tempo squats (IC) x 15.
THA-THANG:
This morning, we battle the Kraken with CMUs.  So, grab your CMU and make your way to one of 8 stations.  Complete the exercise at the station and then do a lap around the AO parking lot, past your last station to the next.  Each station’s exercise has a high rep or low rep choice.  You are free to pick either option.  You must carry your CMU on your lap around, alternating carry as follows:

The stations are as follows (incl. rep choices):

I think we had enough time for everybody to complete one circuit. Very little mumblechatter today.  I’m guessing this was because the Pax was disappointed in how easy it was.  I’ll ramp it up next time.
MARY:
25s of Reverse Lunges and BBS, running Baby Everest in between.  Cut it short to gather at the top and watch a beautiful sunrise for a moment.
COUNT-OFF & NAME-O-RAMA

CIRCLE OF TRUST/BOM:
On this day in 1954, Elvis made his debut on local Memphis radio with “That’s Alright Mama.”  It is a reminder to me that big things start small.  We don’t need to focus on some great challenge or goal all at once.  God gives the ability do great things by simply taking that small first step.  ” I say to you, if you have faith the size of a mustard seed, you will say to this mountain, ‘Move from here to there,’ and it will move. Nothing will be impossible for you.” (Matthew 17:20).  The smallest seeds planted with faith still produce huge trees.  Let’s keep striving, regardless of how small our efforts seem.  They will bear fruit.
MOLESKIN:
Prayers offered today for Snag’s father and continued healing and recovery.  Prayers offered also to Snitch’s 2.0, Ava for a quick recovery from her accident, so that she won’t have any complications, and praises that it wasn’t more serious.  Also, we enjoyed quite the sunrise this morning with a beautiful rainbow.
ANNOUNCEMENTS:
Don’t forget “Off the Chain” CSAUP at the Dog Pound on the 18th.  Sign up! 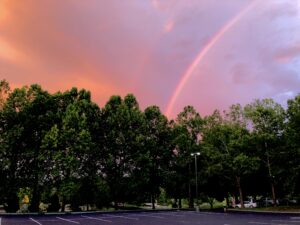 Indian run to base of Matterhorn
3 rounds:
10 merkins
10 BBS
10 squats
Bear crawl (1st round) to Backbone
(David also took on a Bear)
5 pull-ups
5 toes to bar
5 chin-ups
5 knees to chest
Run to summit
10 burpees
Run back to base

Indian run back to AO

COUNT-OFF & NAME-O-RAMA
Abacus, Biscuits, Homebody, Junk, La-Z-Boy, Snitch, Turtle, Waxjob, Yo-Yo
CIRCLE OF TRUST/BOM:
We all know the story of David and Goliath. And I feel like 100 burpees mixed with the Matterhorn is worthy of being called a Goliath. Goliath was a giant of a man, standing 9 ft tall. He was a seasoned, battle-hardened warrior. His spear was longer than David was tall. His shield weighed more than David. The Israelite army trembled in fear of this beast who, every day for 40 days, would come out and taunt them, challenge them, ridicule and slander both them and their God. Our God. Even King Saul was too afraid to challenge the giant, instead offering great rewards to the man who did.
Enter David. We all know about David the king, but let’s look at him at this point in time. He was the 8th and youngest son of Jesse. He was the smallest, the weakest, the least significant of all his brothers. He was relegated to be a farmer and tend the flocks as his brothers were fighting in Israel’s army. He was such an afterthought that he didn’t even make the initial lineup when the prophet Samuel, led by God, came to anoint one of Jesse’s sons as the next king of Israel. They had to go call him in from the fields. Even Samuel himself didn’t think that it would be David.
So David the shepherd, in his late teens or early 20’s, is sent by his father, Jesse, to deliver food and provisions to his brothers on the front lines. He arrives and hears Goliath insulting and slandering God and is overcome with righteous anger and asks why no one has stood up to this man for God’s glory. His brother gets angry and rebukes him. But David, standing for the Lord, presses on and confronts King Saul. Saul offers this young boy his armor and sword, likely the best equipment in all of Israel. David refuses, choosing only a few river stones and his sling instead. This boy, having already killed a lion and a bear barehanded, walks out onto the battlefield, dressed in shepherd’s rags and carrying a slingshot. Goliath laughs at him and ridicules him. But David, standing firm in his faith and fighting for our God and His glory, slaughtered the giant with a single stone.
Goliath takes many forms today, including the 100 burpees we just tackled. It could be that you’re facing an illness, work stress, family struggles, addiction, whether it’s substance or porn or even just comfort (we don’t like to step out of our comfort zones very often, guilty here too). It may not be one single thing. It may be a bunch of little things that, stacked up, take on the form of this giant. But whatever it is, whatever you’re facing, remember that you aren’t facing it alone. You have a power in you that cannot be shaken, cannot be uprooted, that cannot fail. If you stand firm in your faith, if you are being obedient, if you are fighting for Him and the glory of His kingdom, all you have to do is call out to Him. He will come meet you where you are. No matter who you are, where you’ve been, what you’ve done, whether you’re the greatest or the least of your clan. Stand for Him. Fight for Him. Lean into Him. He will lead you to victory. That’s my encouragement and my challenge to you. Our God is greater than anything else out there. He is the one true God, the Creator of the heavens and the earth. Whatever is your Goliath, stand for Him and all else will fall into place.
MOLESKIN:

ANNOUNCEMENTS:
Off the Chain CSAUP – July 18
Sign up posted on Slack
1st 50 to sign up get patches

Mosey to the Splash pad for a little 4-corner action. Exercises are below. Four exercises in each “box”. Rotate To next exercise every 60 secs. Run up the snake and around after completing a box. Run around boxes till 6 catches.

A repeat of shamrock last week:
Think about something your good at. Speaking, fitness, leading, computers…whatever
Ask a couple pax their answer.
Now ask yourself this. Am I using the gifts that God gave me to further his kingdom and To love and care for others outside of my family?
Give 10 second pause
We are all different, we have different skills and backgrounds. Different personalities, different Life experiences.
God could have easily made us all the same. But he didn’t.
He gave us these gifts for us to use not to covet.
So now ask yourself this question.
How am I going to use my God given gift to serve others?
Pause
Now go do it. If you can’t think of a way, ask me or your church.

MOLESKIN:
Good morning of work, mumble chatter and challenging our AO to be a leader in service.