THE SCENE: Beautiful weather, rain held off for us!
F3 WELCOME & DISCLAIMER
WARM-O-RAMA:
SSH x20 IC
Cherry Pickers x6 IC
Windmills x10 IC
THA-THANG:
Everyone grab a CMU and start by the pavalon. We did an exercise with prescribed reps at each cone down the grinder, then ran the short loop back around. When you get back, take your CMU and bears and blocks all the way back to the start. Rinse and repeat for time.

When we come in contact with other people, we should be leaving them in a better state than we found them. It is our responsibility to help raise them up, and to make sure that we do not let any negativity bring us down. No man left behind, no man left the same.
MOLESKIN:

THE SCENE: 61 degree, perfect workout weather
F3 WELCOME & DISCLAIMER
WARM-O-RAMA:
SSH x 20 IC
Cherry Pickers x8 IC
Windmills x10 IC
THA-THANG:
We ran a loop with exercises along the way and repeated until time. Everyone got at least three full laps. The first lap we did together and then everyone went at their own pace after that.

MARY:
One round of Guantanamo (or duck, duck, goose)
Boxcutters x 15 IC
LBCs for the final 30 seconds

COUNT-OFF & NAME-O-RAMA
8 men this morning
CIRCLE OF TRUST/BOM:
“The only person holding you back is you. No more excuses. It’s time to change.” – Tony Robbins

We have the power to change our own lives. There is another quote that says something along the lines of change what you can change and accept what you cannot change. A pet peeve of mine is when some of my employees come in on Monday and start talking about how terrible Mondays are and how they don’t want to be there. Then on Friday, they’re all excited because they don’t have to be at work the next two days and they just can’t wait to get out of there. To me, they need to change jobs if they have that attitude. If you dislike 5 days of your week, then change it. If you’re not willing to change it, then accept it. This is one step on the road to happiness. We need to constantly re-evaluate our situations and how we feel about them and we need to take action in our lives when necessary.
MOLESKIN:

Indian Run over to the Educator only to find out that there is nice smooth dirt (probably freshly seeded). Woodshack did not want to harm the dirt since he is so nice. So instead, we jogged over to the worse and steeper Mount Suckmore and did 12’s instead of 11’s since time was wasted.

Indian Run back to AO

COUNT-OFF & NAME-O-RAMA
13 strong
CIRCLE OF TRUST/BOM:
Kobe Bryant was all over the news and social media this week after his sudden passing in a helicopter crash. One of my favorite quotes I saw by him was:

” I don’t want to be the next Michael Jordan, I only want to be Kobe Bryant”

He spent his life becoming one of the greatest basketball players of all time. He had plenty of people he looked up to, but he was himself and never stopped being himself.

Be your own person in life. Don’t follow in the footsteps of others. Use them as examples and learning points to form the person you want your friends, family, and children to remember when you’re gone one day. That is what leaving a legacy is all about. 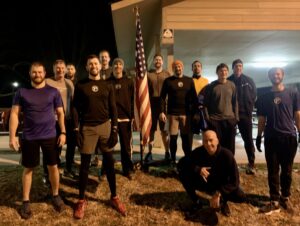 scissors x10
COUNT-OFF & NAME-O-RAMA
14 pax
CIRCLE OF TRUST/BOM:
Stress. I just talked about Stress and the role it plays in our lives. yes, there are many things around us that give us stress but ultimately, we bring stress on ourselves. Stress is based on how we deal with things. For me recently, we just brought home 2 puppies! I have 3 young boys, a work schedule that could keep me working 60 hours a week, kids sports, spending time with the M,etc….LOTS of stuff going on right?! Well, I make my bed and I lay in it! Therefore, I could easily be stressed out but I know everything will work itself out so I try not to stress over it. PRAYER HELPS!! 🙂
MOLESKIN:
Insert any personal comments, notes, devotion content, etc.
ANNOUNCEMENTS:
Insert information about upcoming events, 2nd or 3rd F opportunities, and any other announcements.

THA-THANG:
Skip over to the base of Mt Crumpet
Battle buddy up. One PAX does exercise while the other runs to the top and around the tree and back. Switch. Dora style except no specified rep count.
After both PAX have done the first exercise, mosey to the fountain. Sideways plank shuffle with feet on the fountain – One CW and one CCW until meeting on the other side.
Mosey back and do the next exercise. R&R.
Exercises:
-Merkins
-BBS
-Gas Pumpers
-CDD
-Squat Jumps
-Burpees

Lightning getting closer, so head back to shelter!

As portended, the heavens opened up and the waters descended with a great roar. But the PAX remained only mostly wet in the shelter of the Pavalon.

COUNT-OFF & NAME-O-RAMA
11 PAX got it done!
CIRCLE OF TRUST/BOM:
This is something I’ve mentioned before. However, I need a daily focus on it. For those of us who are married, it’s not a 50/50 thing. It’s 100/100. Today we went around the fountain as pairs, each going opposite ways and meeting on the other side. Nobody stopped halfway and waited for their partner. Just kept going until they met. With your spouse, don’t just go halfway. Give it your all. When crap hits the fan in life, be ready to go the full distance.

MOLESKIN:
It’s been a while since I was on ol’ Crumpet… Somebody planted a daggum tree right down near the bottom of the hill. Little spindly sapling thing… I just about ran right over it on my first trip up.
ANNOUNCEMENTS:
None today