THE SCENE:  Foggy, cool and damp – perfect for a VQ
F3 WELCOME & DISCLAIMER:

Short and sweet.  Modify if needed.  Not a professional.  Work hard.

CIRCLE OF TRUST/BOM:
Explained the ongoing chaos in my life.  For the last month or two, more and more responsibilities and obstacles have been added and I have been poorly managing them.  I am working on controlling the items I can, taking the time to decompress and be the father and husband I want to be.  Control the Chaos.
MOLESKIN:

Inspired by the monthly challenge… CMU Thrust-o-rama = 50 Thrusters OYO/lap around AO/rinse and repeat 3 times; Jump Squats and LBC’s while waiting for 6 (much huffing and puffing ensued/became quiet)

Cooled it down with 4ct Hello Dollies x 50-something (led by @Coolio); a healthy dose of Boat Canoes (led by @Cat Gut); 4ct SSH x 20 (led by QIC); knocked out 4 Jack Webbs; and finished with a handful of Cherry Pickers and Groin Stretches

Shared scripture that QIC has been meditating on recently in pursuit of “cleaning up my act” by living more intentional in my spiritual life, my emotional/social life, with respect to my physical health, and my financial health. Shared Psalm 127:1 and spoke about the importance of recognizing the Lord must build our “house” or we labor in vain; Reminder we each have various “houses” that we are building – our home life (house), work life (house), church life (house), and private/secret life (house).  Important to inspect these houses and be sure the Lord is the master builder and foundation.

ANNOUNCEMENTS:
Convergence and Q 101 on Sat, 2/29 at Asylum at 7am; Bring food and drink for Wesley House donations (next week last week to donate)

THA-THANG:
Head over to the CMU pile. Each PAX grabs one and comes out to the corner of the parking lot.
5 reps of exercise on card, then back to the pile for another CMU, 10 reps, another CMU, 15 reps until all CMUs are gone.
After all CMUs are at the first corner, repeat at second corner, moving all CMUs to the second corner.
Exercises:
-Thrusters
-BBS
-Merky-Derky (Plank w/ hands on block, merkin, bear crawl until feet on block, derkin, crawl bear back. That’s one. Audibled to 5-10-10 instead of 15)
-Lawn mowers

That’s all 4 corners… However, the cards have 2 sides.
-One-hand OHP
-Pull-over get-ups (from your six, reach CMU overhead and touch ground. Bring CMU back up and past your knees, stand up)
-CMU Wine Mixers
-Would have done curls, but ran out of time!

MARY:
No time today.
COUNT-OFF & NAME-O-RAMA
7 PAX for 21 CMUs
CIRCLE OF TRUST/BOM:
Proverbs 3:5-6
New International Version
5 Trust in the Lord with all your heart
and lean not on your own understanding;
6 in all your ways submit to him,
and he will make your paths straight.

So… What’s on my heart today? Yesterday was tough. My wife’s mother, who is in the later stages of Alzheimer’s, moved into our house Saturday. Yesterday we ended up juggling care for her, work, school, shopping, home repair, dinner, and extended family drama. Lying in bed afterward (and honestly wishing at that point that I wasn’t on Q today), I wondered how many more of those days were to come, and how many I could take. This verse came to mind, reminding me again to keep actively putting my trust in Him, specifically both in heart and mind. I wish I could say I was in that place… But I know that’s where I need to be, and pray for strength to get there.

MOLESKIN:
PAX handled everything with aplomb today… Gotta step it up a bit next time!
ANNOUNCEMENTS:
None this week… 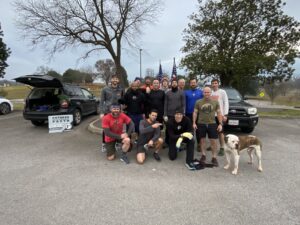 THE SCENE: Just cool enough. No wind. FNG (now known as “Title 9” was the first to show this morning, followed by Abscess & Hercules aka Tank the dog

☐ You and your BB have 3 points of contact

(Sprint back up to the top and hold the plank)

☐ Rinse & Repeat – same exercises – 10 reps of everything instead of 15

(Mosey to path that goes towards dock)

(Mosey on to the dock)

(Mosey to hill before Everest by way of:

☐ Bear crawl up the hill and over the top

(Mosey to base of Everest)

☐ All the way to the top

– Cashed out the day with ATMs

The Man in the Arena does not quit, although he may be knocked down and falter from the original path at times, he’s in the arena and must learn to get back up again and again and again. This is the way.

“It is not the critic who counts; not the man who points out how the strong man stumbles, or where the doer of deeds could have done them better. The credit belongs to the man who is actually in the arena, whose face is marred by dust and sweat and blood; who strives valiantly; who errs, who comes short again and again, because there is no effort without error and shortcoming; but who does actually strive to do the deeds; who knows great enthusiasms, the great devotions; who spends himself in a worthy cause; who at the best knows in the end the triumph of high achievement, and who at the worst, if he fails, at least fails while daring greatly, so that his place shall never be with those cold and timid souls who neither know victory nor defeat.”

☐ In the ring of life sometimes it can feel like we’re on our knees crying out for freedom and all we can do is look up right?

☐ Song by Anthony Hamilton “Freedom” — some of the lyrics go like this: “Felt like the weight of the world is on my shoulders. Pressure to break or retreat at every turn. Facing the feat that the truth I discovered. No telling how all this will work out, but I’ve come too far to turn back now. I’m looking for freedom, looking for freedom. And to find it cost everything I have.”

2. F3 Morristown Launch: Saturday, April 4th, 2020. Clown car(s) will be assembling to go support the launch on 4/4. Be on the lookout for opportunities between now and then to go post at some “test-Qs” at their new AO in the coming weeks/months.