THE SCENE: Humid. Like being in a mouth.
F3 WELCOME & DISCLAIMER
WARM-O-RAMA:
Put on ruck
THA-THANG:

Ladder Part 1: 12 min begin with one rep of each exercise and continue to add till time runs out. Remember how many rounds completed for Part 2.

Ladder Part 2: 12 min using #of reps from Part 1 work back down ladder with two exercises below.

Ruck back to SP

MOLESKIN:
Man who farts in church, sits in own pew.
ANNOUNCEMENTS: 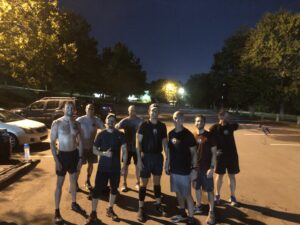 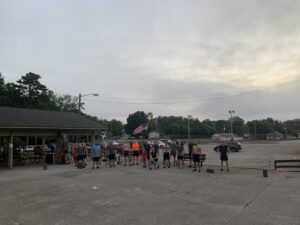 Lunge to cone(60yds), run Loop back

cash out with ATMs!
COUNT-OFF & NAME-O-RAMA
22 pax including FNG upstate and 2.0s nightmare abs coconut
CIRCLE OF TRUST/BOM:
HIM, what is a HIM. We all know it’s a High Impact Man but a few things it takes to be such. HIM also means that we should be H.umble in how we act around others. We should be I.ntentional in everything we do and lastly we need to be M.entally tough. Put those together and we can be HIgh Impact men in our community . This is something that Detention talked about a couple years ago and it’s stuck with me ever since and want to keep sharing it with the pax.
MOLESKIN:
Insert any personal comments, notes, devotion content, etc.
ANNOUNCEMENTS:
Insert information about upcoming events, 2nd or 3rd F opportunities, and any other announcements.

THE SCENE: Mid 60’s and humid
F3 WELCOME & DISCLAIMER
WARM-O-RAMA:
SSH x 20
Arm circles x 10 each way
Hillbillies x 10
Burpees x 5
Lunges x 5
Merkins x 5
BBS x 5
Squats x 5
THA-THANG:
Drop BOMBS on this side the park.
5 targets on the loop. Run and drop BOMBS. Run and drop BOMBS. Etc.
B Burpee 10
O Lunges 15
M Merkins 20
B BBS 25
S Squats 30
MARY:
B O M B S
COUNT-OFF & NAME-O-RAMA
14 including 2 FNGs Kipper and 3Rivers
CIRCLE OF TRUST/BOM:
The bombs in our lives fall on our heads and attempt to blow us to pieces. We here at the Bomb Shelter have an circle of protection from the destruction. Through our bond of sweat and pain we support each man and lift them out of the ashes when it all becomes too much.
MOLESKIN:
Fun!
ANNOUNCEMENTS:

The Count down – Complete each exercise is succession.  When completed do 25 Box jumps or run the hill.   PAX choice!  Remove the bottom exercise after completing each set.  Rinse and repeat

Capn crunch sent to me in a group text w a few others and really like it so I wanted to share the following ;

For a small amount of perspective at this moment, imagine you were an American born in 1900. When you are 14, World War I starts, and ends on your 18th birthday with 22 million people killed. Later in the year, a Spanish Flu epidemic hits the planet and runs until you are 20. Fifty million people die from it in those two years. Yes, 50 million.

When you’re 29, the Great Depression begins. Unemployment hits 25%, global GDP drops 27%. That runs until you are 33. The country nearly collapses along with the world economy. When you turn 39, World War II starts. You aren’t even over the hill yet.

When you’re 41, the United States is fully pulled into WWII. Between your 39th and 45th birthday, 75 million people perish in the war and the Holocaust kills six million. At 52, the Korean War starts and five million perish.

At 64 the Vietnam War begins, and it doesn’t end for many years. Four million people die in that conflict. Approaching your 62nd birthday you have the Cuban Missile Crisis, a tipping point in the Cold War. Life on our planet, as we know it, could well have ended. Great leaders prevented that from happening.

As you turn 75, the Vietnam War finally ends. Think of everyone on the planet born in 1900. How do you survive all of that? A kid in 1985 didn’t think their 85 year old grandparent understood how hard school was. Yet those grandparents (and now great grandparents) survived through everything listed above.

Perspective is an amazing art. Let’s try and keep things in perspective. Let’s be smart, help each other out, and we will get through all of this. In the history of the world, there has never been a storm that lasted. This too, shall pass.

MOLESKIN:
Not to say there isn’t any suffering out there today but overall, our generation has been blessed.
ANNOUNCEMENTS:
Insert information about upcoming events, 2nd or 3rd F opportunities, and any other announcements.

THA-THANG:
Kraken at the Elementary School Including Mt. SuckMore. Once Pax Complete the Movement Run Around Kraken and up SuckMore for 10 Incline/Decline Merkins Before Coming Back Down and Completing Loop to Next Movement.

MARY:
Pax Roulette with LBC Cash Out.
COUNT-OFF & NAME-O-RAMA
9 Hims
CIRCLE OF TRUST/BOM:
Times are tough and people are finding themselves in foreign places. Don’t fall away from the circle, but lean in and find the shoulder of the HIM to your right/left. Reach out, open up and be honest…your not in this alone, I promise.

MOLESKIN:
Was great to see Rain Check back to the grind this morning.
Shout out to Fins getting nearly 8 miles in this morning! Amazing Brother, Stick with it!

ANNOUNCEMENTS:
Movin’ To Slack for Communication.