Every year, my birthday brings back memories of my grandfather since his birthday is the day before mine. Yesterday (10/17) would’ve been his 98th birthday, he passed away about 5 years ago at the age of 93. Growing up, he was the male role model I looked up to. He was extremely kind, soft spoken, generous, honest, and never voiced a complaint about anything. He was overall just a good man.

When he passed away, it left a gap in my life. Even though he set the example for me to chase as a man, him being physically gone for the earth was just tough. I still have always known his qualities and will never forget them, but it just absolutely sucked that he was gone.

I can say with confidence that F3 has filled that gap I had in my life. Every man I have met in this group has given me new qualities to look up to and new role models to set examples for not just me, but everyone. I am extremely grateful for the impact this group has had on my life. I am glad I got to celebrate my birthday being out in the dark on this chilly morning improving my life with these people, as well as hitting my 1 year mark since my first F3 workout. I am looking forward to the next years of beatdowns and getting closer to everyone. I know that all of you would do anything to help another brother out, and that means a lot to me.

The following is from Wild Together, My Adventures with Loki the Wolfdog by Kelly Lund.

Wish You Were Here

The concept of being present is one that is so often said, but rarely lived.  I’m guilty of it.  I say I am going to be more present; I say I am going to  put my phone down and focus on what’s in front of me; I say I will put the camera down and just look with my eyes.  But I don’t. I get caught up and think secondary things are important in the moment, and then the moment is gone.

Never has Loki had this behavioral flaw.  How could he?  He sees now and now only.  I am not saying that beyond my knowledge he doesn’t have a memory band of his past experiences.  Simply put, he is not worried about what tomorrow will bring.  The anxiety of the future, the disappointment of the past; that’s not a thing for him.

If now is all we have, all that is promised, let us not be fools and waste it.

As the Bible says, don’t worry about tomorrow. That won’t add an hour to our life. Tomorrow will worry about itself.  This is the day the Lord has made. Let us all be glad and rejoice in it.

THA-THANG:
Bowser has taken Princess Peach so Mario & Luigi must work together to get through the 8 levels of the Mushroom Kingdom.

COUNT-OFF & NAME-O-RAMA
24 came out to get better! 2 FNG’s – Overnight and Gecko. Welcome!
CIRCLE OF TRUST/BOM:
Lately I’ve been trying to focus on my mental strength. There’s a difference between your body giving up and your mind giving up. Push yourself, learn the difference. This applies to not only our exercising, but to our daily lives. Its much easier to give up than it is to focus and push through a difficult situation. Work on your mental strength, push yourself.

“Always be yourself and have faith in yourself. Do not go out and look for a successful personality and try to duplicate it.”

“We love being mentally strong, but we hate situations that allow us to put our mental strength to good use.”

“If your mindset is defeated, the results will be the same no matter how often you put up a physical fight.”
MOLESKIN: 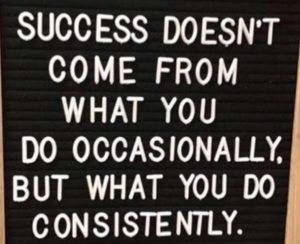 Partner Up for Lazy Doras (no running)

100 merkins -One partner does 10 reps while the other planks, then switch

1 cmu curl, 1 cmu triceps extension  over head , 2 cmu curl , 2 tri extension overhead , keep going till you get to 11 reps of each

madonnas x 10 ic
COUNT-OFF & NAME-O-RAMA
15 pax
CIRCLE OF TRUST/BOM:
Success doesn’t come from what you do occasionally but what you do consistently
MOLESKIN:
Simplt put, be comsistent in everything you do. Keep pushing, keep coming out to F3, keep reaching out to sad clowns!  Keep on keeping on!
ANNOUNCEMENTS:
Insert information about upcoming events, 2nd or 3rd F opportunities, and any other announcements.