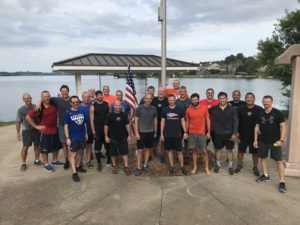 THE SCENE: 75 and ready for Launch
F3 WELCOME & DISCLAIMER
WARM-O-RAMA:
Money to Flag

THA-THANG:
Launch Party included a view of almost all that our new AO “The Equalizer” has to offer:

CIRCLE OF TRUST/BOM:
Great response for the new AO Launch at The Equalizer (formerly known as Carl Cowan Park).

Brief rundown on the history of Carl Cowan and his fight for equality in Knoxville. Change is inevitable, be ready, get ready, be in charge of the change you want in your life. Evolve- do not be the same man you were last year, 5 years ago… be better.

MOLESKIN:
S/O to Frosty, Mayberry, Junk, and Abacus for being with us in the SuperOcho/NirvanaNine quest. Awesome work men! We welcomed “Central Park” to the group and he came in with some respect!

We prayed for Landline and his family as they transition to St. Thomas. Yes, the Virgin Islands. Godspeed brother!

We prayed for Sliderule and his family and for Abacus’ Aunt.

ANNOUNCEMENTS:
The Equalizer will meet on Saturdays only for now but vibe was to expand the schedule. More info soon. Coffeteria at Dunkin Donuts was only letdown of the morning. New spot coming next week.

Switch the exercises half way

Take the time to slow down and really see/learn what wisdom is here to be had.

oh, we threw in some burpees too
THA-THANG:

SURFEES! Superman swim until the big wave came . Slugger was waiting for the big one!

cash out w ATMs
COUNT-OFF & NAME-O-RAMA
13 incl 1 FNG, welcome singlewide and guest from Memphis SLIK NUT!!!
CIRCLE OF TRUST/BOM:
Do the little things and the big things will take care of it’s self

put the lid up when you piss!
ANNOUNCEMENTS:
Insert information about upcoming events, 2nd or 3rd F opportunities, and any other announcements.

THE SCENE: Low 40s… A little foggy and super dark. New moon I guess.
F3 WELCOME & DISCLAIMER
WARM-O-RAMA:
SSH x25 IC
A little bit of hybrid Plank/Planche
LBAC x20 Fwd/Back IC
Tempo Squats x15 IC
TN Rocking Chairs x15 IC
Hindurkins x15 IC
Calfkiller: 20 calf raise, 25% mosey, 20 and 50%, 20 and 75%, 20 and AYG, 20 more to make 100!
THA-THANG:
Mosey on over near the base of Mt Crumpet. On one path, there’s a cone set up. On the other path, we find a pile of boards, each with an exercise.
Each PAX throws their board across the stream at the cone. Mosey around to the other side, furthest one from the cone is the exercise we do.

First 3 throws come up AGT. Decided to retire each board after it loses!
Made it through all but Burpees and Monkey Humpers before we ran out of time.

3/4″x3″x10″ boards are surprisingly difficult to throw! Several ended up in the stream, 2 actually got stuck IN THE TREE.

Row Your Boat (4 rounds until Time!)
COUNT-OFF & NAME-O-RAMA
As Pinocchio put it, 10 men discovered that their chances of surviving in the Australian outback with a boomerang are… minimal.
CIRCLE OF TRUST/BOM:
Stolen from Proton’s BOM yesterday at JUCO, ‘cuz it was that good…

It’s a common thing for us to think about the people that have influenced our lives.  Usually if someone asks you what person has had the most influence, you look externally and think of a parent, a teacher, a coach, or even Jesus Christ.  But even as much as all these influence you, the biggest influence is yourself.  The choices that you make every day both define your future path and make you who you are, action by action, for better or for worse.  Even trying to coast through life and avoid those tough choices is a choice in itself.  We can’t avoid them, so embrace them head on. Be alert for those opportunities, and make that tough choice that puts others first, that builds your character, that honors God.
MOLESKIN:
The cone was originally meant to be at the top of Mount Crumpet, but it was too dark to even see the cone, much less read what was written on the boards.  And dang, 3/4″x3″x10″ boards are surprisingly difficult to throw! Several ended up in the stream, 2 actually got stuck IN THE TREE.
ANNOUNCEMENTS:
Great job everyone who’s recovering from the CSAUP.  Prayers for Squeaker’s cousin Jill and two daughters, who just lost husband/father in a car accident.

THE SCENE: 65 humid degrees with a light wind out of the west
F3 WELCOME & DISCLAIMER
WARM-O-RAMA:
Cherry Pickers x 10, LB Arm Circles x 10, SSH x 15 then skip across the parking lot and back, high knees across and butt-kickers back.

14 PAX set out to get better today

Luck of The Draw

CIRCLE OF TRUST/BOM:
My oldest son Eli is on the autism spectrum.  A while back he observed his younger brother and me interacting with some friends of mine in town.  Later that night, he shared with me that he wished he was like me and Luke.  His desire was to be able to interact better with people and be more comfortable in social settings.  I shared with him that I would not change him even if I could, that what made him special was that he has a unique perspective and gifts that are different than mine.  I told him his mom and I have always referred to him as our magnificent puzzle and that we love who and what he is, no matter what.  He went on his way and returned a little while later and put his arm around me and said, “I love you, dad.”  The word this morning was that sometimes all of us need to hear that our Father loves us unconditionally, defects and all.  We are his wonderful creation.  Jeremiah 1:5 says “before I formed you in the womb I knew you, before you were born I set you apart.”  The Creator of the universe knows me, a screwed-up dude in Maryville, TN.  And that is pretty awesome.
MOLESKIN:
Thank you to my Bomb Shelter brothers for the support and encouragement on my VQ.  I love you guys, you are the best.
ANNOUNCEMENTS:
2/23/18 Meet at the AO around 5:15-5:30 to set-up for CSAUP, there will be a little running, a little driving and a little fellowship at Public House for Fermentation Friday.

2/24/18 CSAUP at 6 AM sharp.  Please park in the parking lot of the Methodist church adjacent to the park.