3. anti-fragile , be durable and thrive

Thriving  in the chaos of the unpredictable.

MOLESKIN:
Let’s strive to be anti fragile ! That does not mean we go beat our chests and become tough guys, so to speak. It means we should prepare / practice to thrive in daily life. Could be a Q you have coming up or that business proposal or family life , etc…  the point is that if we are prepared and fit to thrive in our situation , what ever it may be, we will be able to adapt in a positive way to anything unpredictable. 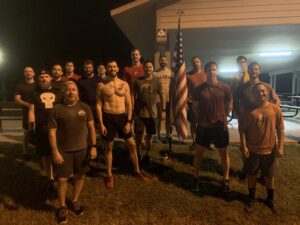 ANNOUNCEMENTS:
Insert information about upcoming events, 2nd or 3rd F opportunities, and any other announcements.

Side crunch on the top, side lunge on the bottom, Bear Crawl down, Bernie up

MARY:
Flutter Kick, Banana/Plank
COUNT-OFF & NAME-O-RAMA
Use the TAGS on right-side to record PAX (BE SURE TO INCLUDE YOURSELF) in attendance. Be sure to select the AO in CATEGORY above TAGS and then delete these notes!
CIRCLE OF TRUST/BOM:
Matthew 6:25-34 , take a note of where you’re starting from. Start from seeking the kingdom and trusting God. You don’t have to do all the stuff you’re worried about to earn favor. Do it because you are already in His kingdom.
MOLESKIN:
Insert any personal comments, notes, devotion content, etc.
ANNOUNCEMENTS:
Insert information about upcoming events, 2nd or 3rd F opportunities, and any other announcements.

THE SCENE: About 72° and dry, perfect weather for some dancing! 17 PAX total, 1 FNG (Wake Up)
F3 WELCOME & DISCLAIMER

THA-THANG:
Setup on the Grinder in a Dora Style workout. Stuck with the dirty dancing theme and listened to the soundtrack during the workout. 3 sets of exercises per round with 2 rounds. Ran a small lap between rounds all completed with a partner. Wrote in chalk at the starting line what the exercises were and how many reps per exercise. Partners had to complete the total amount of reps combined before moving to next exercise.

Run to road and back around

MARY:
Alphabet Mary (A-Z) and Finish on a Superman hold ~45sec
CIRCLE OF TRUST/BOM:
Recently I have been thinking about relationships, both with my wife and with my friends. I once heard some of the best relationship advice I think is out there. “Don’t keep score on favors, just do nice things for each other because you care about them.” My wife is in graduate school currently and she gets tired and exhausted by the end of the day like most of us. Even when we both are sitting on the couch, if she asked if I can get up and get her something, I don’t hesitate. I don’t really know what it is like to be in graduate school but I do know it takes a toll on her. Even tho I am tired too, I care about her enough to jump off the couch and get what she asked. I don’t keep count on how many times this happens because I don’t do it to have her do it for me later. I know she cares about be that when I am having a bad day, she will do the same.

THA-THANG:
Wouldn’t be CMUesday without CMUs! Head over and grab one.

Station 3:
On the Shelf/(One-hand OHP), 30/(20), Pregnant Crab/(Blockee Broad Jump)
Choices: Kept On the Shelf, missed a reprieve by keeping the 30 reps. Nobody liked the Pregnant Crab idea… Until we found out what was on the other side.

Station 4:
Burpee Hop-Over/(8-Count Blocky Builder), 25/(10), CMU-icide/(Bunny Hop)
This one was the spirit-breaker. After the Blockee Broad Jumps, nobody wanted to touch the Burpees. But we ended up with the 8-Count Blocky Builders instead! 25 showing… Nobody brave enough to make the deal that would have cut the reps to 10. Let’s knock ’em out! Everyone happy to run the CMU-icide, so Bunny Hops remained hidden.

One lap completed! Time for another lap, this time with the excercise/rep combos that were NOT chosen last time:

Station 1:
Squat Thrust revealed. Only 30 since we did 45 last round… Snitch gets apologies from the PAX. Interminable Crawl Bear dragging the CMU.

Station 2:
Merkins on the CMU – 60 of ’em! That’s a lot… If you need a breather, take a mosey down the parking lot and back.

they shall be as white as snow;

Most of the deals I offered today kinda sucked. Some just worse than others. And you didn’t know what you were going to get. God lays it all out there. Here’s His deal: Trade your sins for His righteousness through Christ!

MOLESKIN:
Pray for Helga’s family as he heads off to “play army” for a month!
ANNOUNCEMENTS:
Brolympics coming in November!

Ooo THE SCENE: Not too bad out.
F3 WELCOME & DISCLAIMER
WARM-O-RAMA:
SSH
High knees
OH claps
Windmills
THA-THANG:
Mosey w/ CMUs to the Educator.
Under construction so we audibled to the field across the street.
Suicide the cones then run the loop back in between rounds.
5 rounds of 20 reps each.
Derkins
Thrusters
BBS w/ CMU
Curls
Tris
MARY:
CMU up flutters x 20
COUNT-OFF & NAME-O-RAMA
13 brothers
CIRCLE OF TRUST/BOM:
Asking for help is ok. Emotionally as men we may bottle up our feeling because if we ask for help we think there is something wrong with us. Just like we need help from our brothers out here to get better physically we need to rely on our brothers and significant people in our lives to get better emotionally.
MOLESKIN:
ANNOUNCEMENTS: