Mosey to shovel flag. Line up along curb. Run to each parking line (5 total) and back, stopping at each line for 5 Diamond Merkins, 5 Merkins, 5 Werkins. MARY:
No time
COUNT-OFF & NAME-O-RAMA
26 strong including 8 JUCO Monday Motherruckers. 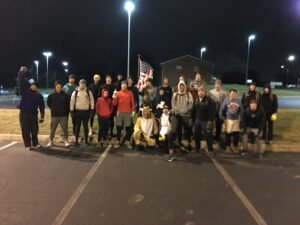 CIRCLE OF TRUST/BOM:
Music is powerful. It can set your mood, stir up thoughts (both good and sinful, inspire people, etc). I recalled the time frame when I first began to come to saving faith in Christ (late 20s). There was a Christian radio station in Houston doing a 30 Day Challenge to anyone interested. The challenge was to listen to Christian radio for 30 days straight. I took part in the challenge and it changed my life in a good way.  I challenged the F3 JUCO men to do this. and suggested several Knoxville radio stations to listen to.  I also discussed what an awesome witness this can be to your children while in the car, on the way to school or wherever.

THE SCENE: Cloudy and cool, with temps around 32, and a wind chill in the high 20’s.
F3 WELCOME & DISCLAIMER: This is F3, Fitness Fellowship, & Faith.  Q has a cell phone in case of Emergency.  He is not a professional, and does not know your injuries.  You will need to modify accordingly.  You are here on your own volition, the only thing that brought you here was an EH (Emotional Headlock), and a desire to check out why these guys get up so early to roll around in parking lots.
WARM-O-RAMA:
Cherry Pickers to 5
Baby Arm Circles forward & Backward 10 ea
The Motivator from 12 (312 total reps)  This exercise reduced the mumble chatter to zero and left only groaning and complaining.

This is a 2 station workout.  At station 1 located near the coupon pile, you will perform 20 reps of each of the following 6 exercises with a coupon: Rows, Curls, Squat Thrusters, Tricep Extensions, Calf Raises, BBS aka “Louganis” holding coupon over head.  After you complete the 6 exercises, run to the top of sophomore hill.  At the top you will perform 6 more exercises, again with 20 reps each.  The exercises are as follows: Wide Merkins, Squat Jumps, Curb Dips, Diamond Merkins, El Capitan to the crosswalk, and handrail pull ups.  Once you finish run back to station 1, where you will rinse and repeat.  This is an AMRAP routine.  Most PAX made it to the third round, some beast studs began their fourth.  Butter Knife was out font leading the charge with Frenchie and Erector hot on his trail.  There may have been others in the lead group, but I was not.

MARY:
Very little time for mary, the PAX held plank on their elbows for a short time (15-20) seconds.

COUNT-OFF & NAME-O-RAMA
29 HIM’s, no FNG’s.  My video failed, and I am proud of recalling 29 names from memory.  I will admit I struggled to complete the list as my picture was very grainy.
CIRCLE OF TRUST/BOM:

MOLESKIN:
Praise from Butter Knife for the Men of JUCO.
Mermaid, 16th Wedding Anniversary today. His M is a patient woman for putting up with him for that amount of time.
ANNOUNCEMENTS:
Hardship Hill, can we create 2 Juco Teams?
OTB RUCK workout similar to the rush concept on Monday morning.  0500

Ring of fire with two merkins while all other PAX hold a plank.  Then, we made an attempt to do a 6″ plank while the PAX did a merkin around the ring, but it didn’t work all that well (poor instructions given by the YHC).  We finished up with 10 flutter kicks.

COUNT-OFF & NAME-O-RAMA
33 HIMs at JUCO.  Welcome FNG, Hound Dog!
CIRCLE OF TRUST/BOM:
Proverbs 28:23 – “He who rebukes a man will afterward find more favor than he who flatters with the tongue.”  Confrontation is sometimes a difficult thing to overcome, but sugar-coating the truth may be worse.  Correcting a brother, may help him to direct him back to the right path and may help save their soul.  As a result, a stronger, more meaningful relationship may flourish.
MOLESKIN:
It was great to get to Q once again at JUCO.  It is amazing what a year has brought to this AO!
ANNOUNCEMENTS:
Sign-up for Hardship Hill.  Judge Judy has your Brolympic shirts if you ordered one.

Demonstration of five exercises to be performed along the five light poles up the center of the road.

Progressive workout performed as such:

This is a  true grinder up Mt. JUCOnte and proved once again to be a tough one, but the PAX pushed through and got work done.

Mosey back to the shovel flag for some Mary.

10 reps of an exercise as called by a member of the PAX. Immediately upon completion, the next PAX in line calls out the next exercise. We did BBS, Breast Stroke, Flutter Kicks, LBCs, BBS, Shoulder Taps, Box Cutters, and SSH

COUNT-OFF & NAME-O-RAMA
19 HIMs tackled Mt. JUCOnte in the pouring rain. 2 FNGs defied all odds to come out on a rainy, cold day. Welcome Tinker Bell and White Noise!
CIRCLE OF TRUST/BOM:
As we start a new year, reflect on your commitments in 2019 and learn to say “No” to those that don’t benefit more than just you. In 2020, my goal is to say “No” to those things that only benefit me and take time/passion away from my faith and my family.
MOLESKIN:
Shoutout to Tinker Bell and White Noise for making the HC to come out on such a nasty day. I felt bad having their first Q be such a grinder, but they both killed it.
ANNOUNCEMENTS:
Hardship Hill – Mandolin has stepped up to design the obstacles that JUCO will be building for race day. Let’s work with him on collecting the needed materials. Keep an eye out for a future workday to get the obstacles built.

Partner up (partners used later at Sophomore Hill)
-5 x each Booyah! Merkin (modified to do high fives instead of shoulder taps as described in the Exicon)
-5 x Bropees
-3 x each / 6 x total Squat Walking Rockette – Start in a parallel squat with arms in front and kick your left leg toward your right hand, squad back down, kick your right leg toward your left hand, squat back down and repeat.

THA-THANG:
Black Snake to Sophomore Hill. PAX are getting better on the spacing but still need some work on their turning spacing.

DORA Circuit AMRAP for 10 minutes:
1. 3-legged Bernie (aka Laverne & Shirley – S/O to Guardrail for naming this one) – backwards run joined at the hips up the paved part of Sophomore Hill
2. 5 x Bropees at the top (high-five encouraged to avoid jumping into each other with a high-ten Bropee)
3. Wheelbarrow down the grassy part of the hill – halfway switch (modify if both PAX cannot do all the way down the hill to a bear crawl or lunges)
4. 5 x Booyah! merkins at bottom (same high five modification as during the warm-up)

DORA Crew (3 HIMs per group) – 5 minutes AMRAP per round

Recover called – no time for Round 3 (plus who knows if the Q would have been able to run/walk carry 3 CMU’s).

Flutter kicks IC after “recover” was called and PAX were still putting away their CMU’s.

Black Snake back to the AO

MARY:
BBS 1 minute AMRAP until 6:15
COUNT-OFF & NAME-O-RAMA
17 HIM’s bearing each other’s burdens and CMU’s (link no pic uploaded). No FNG’s. Welcome back from sleep deprivation aka a new baby, Gump!

CIRCLE OF TRUST/BOM:
F3 has meant so, so, so much to me! Today we focused in the workout on working together as HIM’s. To be able to better bear each other’s burdens as I’ll read from Galatians 6 here in a moment, as the PAX have known and seen in me, more transparency and vulnerability is required to be able to better bear each others burdens. It’s F3 so much as the organization so much (though it is a solid organization) but the HIM’s who walk with me, push me, and ENCOURAGE me at 5:30 A.M. when I would previously see another woman not my wife. This was evil and wicked what I did before, but now God has changed me and my life so dramatically for the better. So while it might seem like verse 1 of the the following passage is a bit off on a first reading of the passage, I think it fits perfectly into where I’ve been walking and how we ought to walk was HIMs:

Galatians 6:1-5
“1 Brothers, if anyone is caught in any transgression, you who are spiritual should restore him in a spirit of gentleness.
Keep watch on yourself, lest you too be tempted.”
2 Bear one another’s burdens, and so fulfill the law of Christ.
3 For if anyone thinks he is something, when he is nothing, he deceives himself.
4 But let each one test his own work, and then his reason to boast will be in himself alone and not in his neighbor.
5 For each will have to bear his own load.

When we exercise (physically and spiritually), we’re doing several things. We stretch our comfort zones working out and this will be especially true today. This passage outlines them for us:
1. v1-2 – Bearing each other’s burdens (especially through prayer – we’ll come back to this)
2. v.3 – Don’t think you’re something when you’re nothing
As Proverbs 27:2 says “Let another praise you, and not your own mouth; a stranger, and not your own lips.” We may think we’re something, but God tells all of us that we are nothing and to be humble about everything.
3. v.4-5 Each one test his work, bear his own load.
When you workout, you’re not comparing yourself to other HIMs here. God has given us each different talents, abilities, skills, bodies. But we are called “to be faithful and not successful” as I heard Rick Dunn say at Maple Street Nights a few weeks ago. Paul agrees “”For who sees anything different in you? What do you have that you did not receive? If then you received it, why do you boast as if you did not receive it? (1 Corinthians 4:7)”

Back to Bearing each other’s burdens
You’re here to bear your own load and carry other HIM’s burdens when they can’t, and you let them when you can’t. Like how the thrusters were made SO much easier without CMU’s and how if we’d had time the Hodor would have been easier as one HIM tried to bear all 3 CMU’s at once.

When all groups finished the Q said “bring it in” and prayed as one group of HIMs bearing each other’s burdens.

MOLESKIN:
Prayer for all of the HIMs present going into 2020 that we would bear each other’s burdens both at F3 and wherever we go as God calls us.

ANNOUNCEMENTS:
JUCO NYD workout is ON for 0530 (with rucking after the normal workout is on. JUCO Rush will start at 0700 just for this week).

Polar Bear Plunge New Year’s Day 12:00pm. Meet at the Wye in Townsend. Immediately following we’ll have 2nd F at Soccer Taco Northshore. This has grown to be an awesome 2nd F event! Don’t miss out on something that seems impossible but could be invigorating!